As part of our 2020 Exhibition programming, curator Lauren Applebaum interviewed local artist Loraine Lynn about her artistic process, and the concepts behind her work including identity and fluidity, labor, and the unconscious. 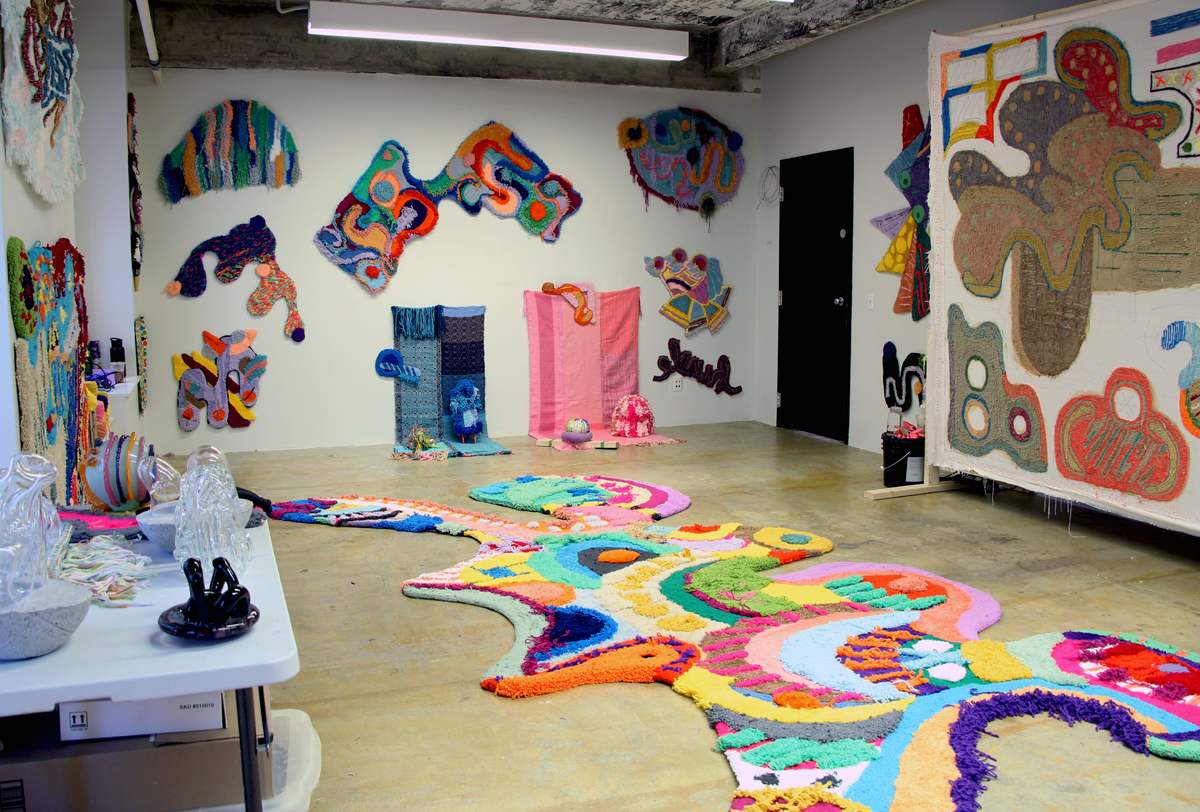 A look inside Loraine Lynn's Toledo, OH studio. (Image provided by the artist)

Lauren Applebaum, PhD joined the Toledo Museum of Art in 2018 as a leadership fellow. She brings over a decade of museum and art world experience to this position, which aims to cultivate membership of the next generation of museum leaders by providing direct experience in strategic planning, curatorial and program leadership, board engagement, donor stewardship, financial and resource management, policy development, and community engagement. Prior to accepting this position, Applebaum was the GSK curatorial fellow in American art at the North Carolina Museum of Art in Raleigh (NCMA), where she participated in significant museum exhibitions, acquisitions, and collection building projects.

Applebaum received her B.A. from the University of Colorado at Boulder, her M.A. in art history at Hunter College, CUNY, and her Ph.D. in art history from the University of Illinois at Urbana-Champaign. Her doctoral research on the intersection between art and social technologies in the nineteenth century was supported by fellowships at Crystal Bridges Museum of American Art, the Huntington Library (Calif.), the Henry Luce Foundation/ACLS, and the Smithsonian American Art Museum. In addition to her academic and museum fellowship positions, she also worked in New York City, both in art advisory and gallery roles, and in the executive office at Christie’s.

Loraine Lynn is an artist based in Toledo, OH. She is interested in working with materials and methods that are fluid. She is currently focusing on textiles in the form of tufted work and is always trying to find the balance between conceptual projects and purely visual pursuits.

She has earned degrees from the Cleveland Institute of Art and Bowling Green State University in Glass, Sculpture, and Three-dimensional Studies. She has exhibited work nationally and internationally in countries such as South Korea, Ireland, and Italy. She has been a featured artist at the Toledo Museum of Art's Glass Pavilion and has been awarded a residency at the Vermont Studio Center.

Lauren Applebaum:
I first want to ask you to tell me a bit more about your artistic trajectory. I know you've worked with glass, video, and other media in the past. What was it that drew you to work with fibers, and is there a continuity--whether conceptual, visual, textural, or procedural--between this and your work in other media?

Loraine Lynn:
During my time as an undergraduate I was concentrating on glass and wanted to branch out, which led me to take a weaving class. As I was spending time working in the fiber studio I found that the process of weaving - prepping the materials, measuring the warp, dressing the loom, and making the textile - had a lot of similarities to glass, despite the contrast in materials and working environment. They both are labor intensive, repetitious, and rely on a series of set structures, such as a use of specific tools, furniture and the like.

Labor and process are two important concepts I've engaged with in my work over the years. Even though there is a variety of aesthetics within my work, continuity can be found in the conceptual frameworks I’ve been exploring in my practice. I approach different media with the same procedure: I question something about it and I break it down so I can look at it from a different perspective. I am a sucker for deconstruction! This lets me draw out similarities and parallels in materials and practices that, on the surface, have nothing in common. Usually something really interesting emerges from the in-between space that exists (or is created) in exploring, as well as comparing and contrasting things in this way.

Building on this idea you've just described about labor and process, does this fluidity or crossover between seemingly disparate artistic genres or materials have any bearing on your ideas about identity, whether personally, as an artist, or more broadly? Put more simply, what role does identity play in your work? Glassmaking, for instance, has traditionally been a very male-dominated field, while weaving and other textile-based craft practices have had these associations with "women's work" and "domesticity."

I think that fluidity and disparate materials definitely shape my ideas when it comes to identity in my work. I’m drawn to the concept of identity as fluid and not fixed, especially within the arts. Not to say that standards and rules don’t serve a purpose, but I appreciate tension and the unease that can come from questioning rules. That’s where the interesting ideas and conversations come from. And who doesn’t enjoy bending the rules every once in a while?

I think and act more broadly rather than personally when it comes to my artistic practice. There’s always a tinge of something personal in anything anyone does, but I’m more interested in broader contexts when it comes to identity. The gender baggage within glass and fiber have definitely informed my work in terms of my interest in identity. It has led me to theorists and concepts that I revisit often as I work. Most of these theories center around labor. I’m fascinated by the idea that people are defined by what they do (usually their vocation, but it can go further than that). It’s such a minor thing that holds a lot of importance. I’m most interested in the conversations that can arise when it comes to my approach to identity and meaning within my work. Since I leave things open I would like the audience to consider the possibilities of what that openness - within identity and otherwise - can mean.

Let's talk more directly about your tufted pieces featured in the Momentum exhibition. Adaptive Unconscious, specifically, brings to mind ideas about psychology and the history of tapping into the unconscious in artmaking. While the bilateral symmetry of the work resembles that of a Rorschach text, its positioning on the ground might remind viewers of the working process of abstract expressionist painter Jackson Pollock, whose action paintings were influenced by Surrealist ideas of automatism. What is the role of the unconscious in your work, and can you tell me more about your decision to display it on the ground? 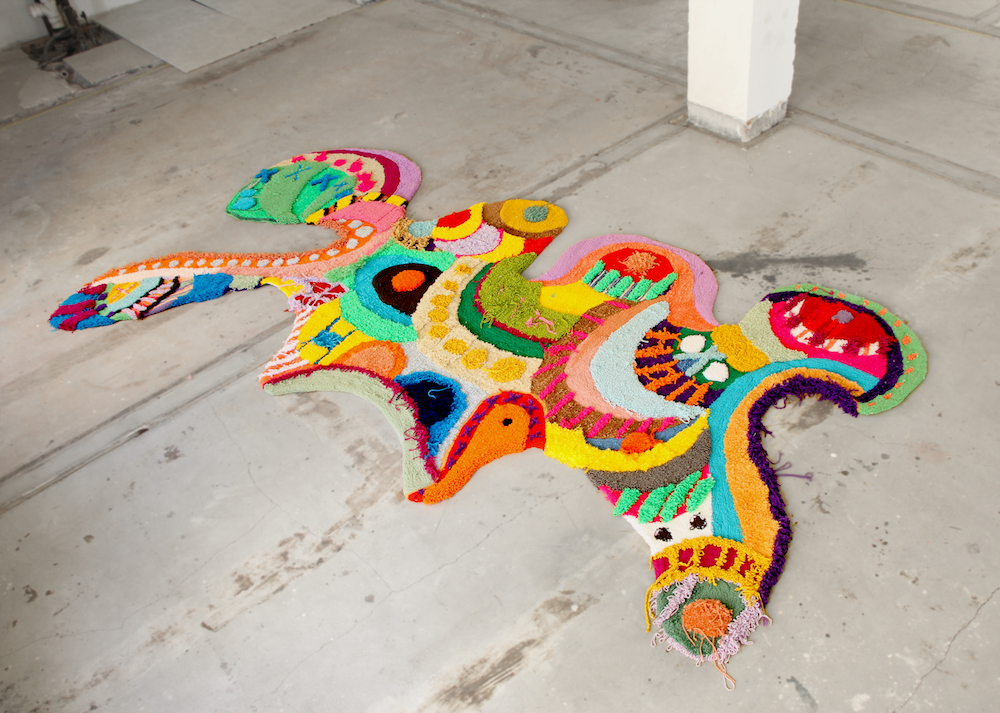 It seems I have an unconscious push to engage in physical methods when making, which provides a certain foundation for the conceptual part of my practice. The tufted work, while relating to how I typically make art, also ventures away from that. Adaptive Unconscious is a big example of thinking-through-doing for me. The scale of the work is the largest I’ve attempted so far and even though I had a plan, I had to go-with-the-flow at times while working on the piece. There were moments in the process that I went with my intuition and stepped away from elements that were planned, taking them in a different direction that seemed right in the moment.

There is never a concrete display for my works - I really like to see how they interact with the spaces they’re being displayed in. Adaptive Unconscious is positioned on the ground in order for people to sit on and interact with it as well as each other. I want this work to be a place for people to come together. The textile is ultra colorful, textural, and large in scale to draw attention towards it and to accomodate an audience interaction. It can act as a conversation piece or as something that taps into the audience’s unconscious thoughts. While Adaptive Unconscious can be considered an object, I see it as a step closer to my goal of creating site-specific tufted work that is participatory and experiential.

Your reference to the unconscious also makes me think of the meditative state of mind some makers describe experiencing while engaged in knitting, stitching, or other forms of needlecrafts (I suppose this, too, goes for other industrial workers engaged in repetitive processes). Can you tell me more about your process of tufting? What instruments are involved and how do they work? And, lastly, I love this intent of audience participation and interaction. Looking toward your future work, how do you see this playing out in site-specific installations?

It’s really easy to slip into a meditative state when tufting. I’ve had someone I shared a studio building with describe the sound of the machine to me as “a soothing typewriter.” She was working down the hall, so she got the muffled version of the tool at work. The repetitive nature of the process helps with focusing and getting into a flow state.

The main component of my current process is the tufting gun. Its popularity has sky-rocketed over the past few months, which has been interesting to see. It’s basically a machine-powdered needle that forces yarn through a stretched substrate (usually a open-weave fabric) in either loops or cut piles (think shag carpeting). The process can be loosely compared to painting or drawing. There’s a square structure that holds the fabric in place and keeps its tension so the yarn can make its way through. The piece is usually made row by row and is reminiscent of line drawing in the beginning parts of the process. Pieces are made from back to front, so there’s some planning and sketching that is involved (and sometimes that goes out the window during the process). It’s really fascinating to see the tufting process in motion because of how fast it works. I think that’s what’s appealing about the tool - it allows for a piece to be made rather quickly. A concept can be realized rapidly and there’s something really satisfying about that.

There’s a lot I am planning on exploring with the tufted pieces and the tufting gun itself in terms of performance and installation. Ideally I would like the tufted pieces I’ve been doing to purposefully alter and interact with the architecture of a specific space. That’s happening on a base level right now, but the full intention isn’t realized yet. I like the idea of people considering the space they are currently in with intention and considering their own bodily interactions with that space. There are a lot of connotations and associations that are made between the body and space (not limited to architecture) that I would like to flesh out and explore with future iterations of this work. It may be a while before I can see this kind of work out in the world, but I would like the audience to take away a different understanding of textiles beyond decoration, object, or garment. An understanding that is more of an experience. At the moment what exactly that experience or audience participation would be, I’m not sure. I would like it to evolve organically from the conversations and gatherings that have been happening with the work so far. It may be a while before anything can really happen in that regard! 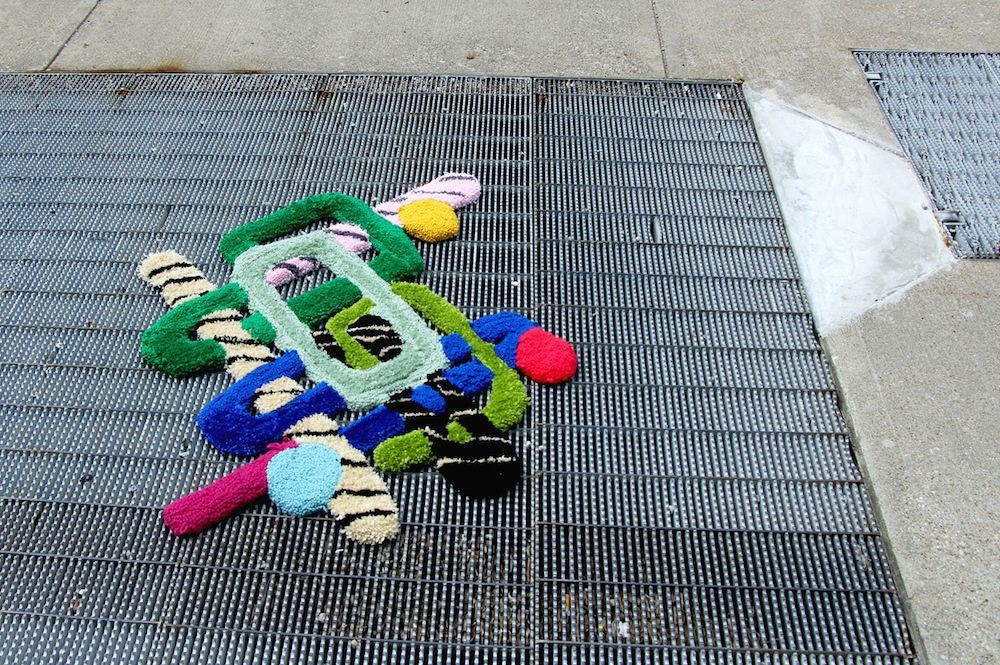